This book is simply amazing.

Maggie Stiefvater is quickly becoming one of my new favorite authors, and her latest book The Scorpio Races did not disappoint. I do have to say that if you are a Wolves of Mercy Falls fan, you may or may not like this one because it’s vastly different from the poetic love story we all love so much. That said, if you treasure a good story, good storytelling, and unique plots painted well—not to mention mythology—you might just love this one like I do.

Have you ever heard of kelpie, or water horses? Some legends say these creatures are darkly bloodthirsty, and will eat a human just as soon as be ridden by one. In The Scorpio Races, we meet an entire island of people who rely on their annual race of such horses as their main tourist attraction and one young girl who enters to win in order to save her family after the death of her parents.

There’s some simple romance with some beautiful moments, sure, but more importantly there is the kind of archetypal, raw elements that you might find in a classical work woven into this young adult novel. I haven’t read anything like this since perhaps The Giver or Lord of the Flies,  yet it’s still very different on its own. The gravity of a teen book like The Hunger Games is present, but there’s a poetic nature that’s common in Stiefvater’s books, and a primeval mythic quality that I still can’t even think of an example to compare it with. It is thoroughly enjoyable, ruthless while beautiful, to say the least, and if you read anything this winter, you wouldn’t go wrong with it.

Remember how amazing Jana Oliver’s The Demon Trapper’s Daughter was? And then we had Soul Thief, which sounded great but was really like just holding your breath for 300 pages waiting for something to happen (while wanting to smack Riley in the face a la Bella Swan)? I mean, there’s tension, and then there’s just, “You’re losing me, Jana!” Know what I mean? (Spoilers ahead.)

Well, Forgiven, the third trappers book, almost takes us back to badass Riley and her ultimate awesomeness, and I am starting to see where Oliver is going with this shadow of Riley. After her father’s death, her near-death experiences (and nearly bagging a Three by herself only to have it stolen and she, herself, threatened), and Simon almost dying—not to mention the burden on her shoulders—she’s in an obviously vulnerable state.

No more of this “Trapper scores!” hot chocolate drinker; now she is just lonely and in need of some unconditional love. I only wish that had been made a little more evident in the previous book, as it just felt like her coasting along.

Book three details how Riley indeed prevents the Apocalypse, and we get to see her be strong and brave almost to the scale she once was. I think her losses have simply caught up with her, however, because in many instances she just doesn’t even want to fight. She is not the Blackthorne’s daughter we were initially introduced to. And by the end of the book, she faces one of the ultimate betrayals—not to mention Beck’s double standard disapproval.

In this third book, we still have some of that ghost-of-Riley-ness in book two. We have a Riley who is reluctant to even catch demons, a girl who asks for help and whose boldness seems lost. I am crossing my fingers so hard to hope that book four Riley isn’t the book two (and partly book three) whiny girl who just wants a boy to love her. (I fear that it will be Beck-fawning rather than Simon-fawning, unfortunately.) I understand it—I’ve felt it before and made mistakes like Riley, so I understand the theme—but I really miss our ultimate heroine demon trapper!

I think part of the reason I loved the first book so much was that the romance was completely secondary—even tertiary—to the story of an awesome teen demon trappin’ girl. I hope that book four brings that back full circle. I still love Riley—and I like Beck on his good days—and I want to see her become who she was meant to be.

Yolen’s YA tale is fun, but not as enjoyable as her adult fairytales. 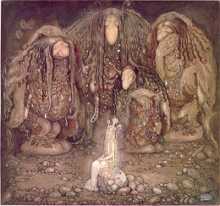 It’s no secret that I am utterly in love with Jane Yolen and pretty much every single thing she writes, from children’s books to amazing speculative fiction short stories in adult compilations. She’s pretty much one of the queens of the modern fairytale, and I will read anything with her name attached. When I saw that she had penned a young adult novel with her rock and roll musician son, Adam Stemple, I knew I had to read it.

Like I guessed, Troll Bridge: A Rock ‘n’ Roll Fairytale, was an enjoyable read, though I didn’t enjoy the format so much. It was told all in third person point of view, though some chapters were clearly from different character’s situations—which was fine—but some of it was through a few brief interludes featuring a radio station with updates in the “real” world, rather than in the fairytale land where it took place, and that was sort of annoying. It reminded me of novels I read as a child in school where we had to analyze setting or voice or whatever and it was used on purpose.

That said, it was still a really fun book with surprisingly gross and horrifying scenes—such as cannibalism!—and trickster gods/monsters that every story vitally needs, if you ask me. There were witty plans presented by young teens, as well as spins on two favorite tales—“The Twelve Dancing Princesses” and “The Three Billy Goats Gruff”—as well as tongue in cheek nods to pop culture references, such as the dairy princesses elected in a real small town. The composition between modern small town traditions and ancient cultures in the Midwest brought across the sea ages ago reminded me of the same ones that were so delightful and dark in Neil Gaiman’s American Gods, one of the best novels ever written. This is almost a teen version, with no sex, a pinch of romance, and a lot of trickery—and, of course, music.

The lyrics to the songs weren’t all that wonderful as far as songs go, but they were cute and fitting for the tale itself. I almost wish the book had come with a CD so we could hear much of it; I think I’ll be checking to see if there is an audio version next, as there is plenty of music playing and singing in the novel.

Troll Bridge would be a wonderful gift to the teen in your life who loves fairytales as well as music—weather it’s the classics or the latest boy band.

Be your own book club!

If you seem to be having trouble establishing your own book club, why not simply start one as a family? Even if there are only two of you, it will still yield some fun times and perhaps even the most special memories of your life. Some of my favorite memories as a child are of my parents reading to me, as well as me reading to my younger sisters—and now we are forging new ones as my husband and I take turns reading aloud with our daughter.

It all started last spring when he was laid off and we started reading The Hunger Games together. We made it through The Hunger Games, its sequel Catching Fire, and the final installment of the series, Mockingjay. Though we’d tried to read books together before in our relationship, we’d never succeeded like this before—and since my husband is not a big reader (he NEVER reads, actually) this was a huge deal to us both. We could finally discuss the books I loved so dearly—and when we saw the film together, we could discuss its differences as well!

Now we are reading Brandon Mull’s Fablehaven series aloud, and our daughter loves it so much that if we forget a night she reminds us. When we read the previous trilogy together, I read all of the chapters aloud; however, we are taking turns this time in order to show that we both enjoy reading and to provide a good example. I think my husband actually enjoys it, too.

To create a family book club, you can all choose a book that’s age-appropriate for the youngest member while still being interesting to the oldest one. You can also take turns reading as we are by swapping chapters, or if it’s a picture book, having a new reader on each reading night. You may want to establish a special night once per week, or simply read every night before bedtime. Many families may opt to read an entire chapter before bed each night as a calm closing to the day.

Be sure to discuss the book together as well—not just in an academic way, but by discussing each other’s likes and dislikes, too. You’ll get to know one another better as a family while you develop a love of literature for a lifetime. You might even get some good ideas for future Christmas gifts in a genre!

We Support
Climate Activism
Click to reach the League of Conservation Voters.
Conversation Processing Intelligence™ beta website!
Click here to visit the hub of the Klat Network.
This site is part of the Klat network of blogs, forums, and communities.